Recently, our Division Seven (D7) threat intelligence team detected a credential stealer piece of malware being posted in a cryptocurrency trading Telegram channel that we monitor as part of our work with financial service customers in the digital currency space. We analyzed and identified the malware sample as “Echelon” and reviewed the messages surrounding the post. The Echelon malware performs a variety of functions, targeting credentials, crypto wallets, and device details.

We believe that this particular incident was an isolated one-off attack meant to target new unsuspecting users of the channel. However, the incident points to the risk exposure financial institutions face as employees take to modern communication applications, including mobile chat like WhatsApp and Telegram, to conduct business. There are certainly compliance risks to business communications on these new application. However, the cybersecurity risks of employees communicating in these apps appear to be less well integrated to financial service institutions' overall security strategies.

This blog will present a summary of our analysis of Echelon, but we encourage you to download the full report for a more comprehensive analysis, including screenshot of the code. 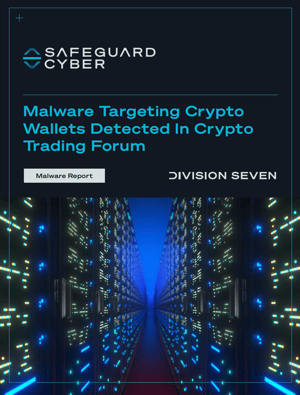 This sample of Echelon was delivered in an .rar file titled “present).rar”. Inside it included 3 files:

An analysis of the malicious executable shows that it contains several anti-analysis features. It has 2 anti-debugging functions, which immediately terminate the process if a debugger or other malware analysis tools are detected. Additionally, the sample is obfuscated using ConfuserEx v1.0.0.

After de-obfuscating the .NET code, we found that the sample performs several crypto wallet and credential stealing functions, as well as domain detection and computer fingerprinting. The malware will also attempt to take a screenshot of the victim machine.

The sample attempts to steal credentials from multiple different messaging, FTP, and VPN platforms, including:


The sample attempts to steal the credentials/data for the following digital currency wallets:

Fortunately, Windows Defender detects and deletes the Present.exe sample and alerts it as “#LowFI:HookwowLow”. RELEASE

Network traffic: Calls out to api.ipify.org

The following IP, which is most likely a proxy, was found in the sample .NET decompiled code and it appears to be where the sample may be attempting to POST the stolen data to:

To learn more on how we can automate cybersecurity for your team’s digital communications, please get in touch with us.