Why the EA Games Breach Matters, and How You Can Defend Yourself

EA Games was recently the victim of a compromise in which some of their highly valuable source code for current and upcoming games was stolen.  The interesting thing about this attack is that the initial compromise didn’t exploit a unique vulnerability or start with a common phishing attack. Instead, the breach reportedly happened through Slack.

According to an interview between the alleged malicious actors and Motherboard, the hackers gained access to the company’s Slack instance by using a stolen authentication cookie. This allowed the attackers to communicate with other EA Games employees.  (The actors reportedly purchased the cookie online for $10 and used it to gain access to the EX Slack channel)

The attackers utilized Slack to contact the IT department and manipulate them into providing multi-factor authentication tokens for the EA corporate network. With that access, they were able to locate and exfiltrate 780GB of data, including the source code for FIFA 21 and the Frostbite Engine used in the Battlefield series (both of which are multi-billion dollar franchises). 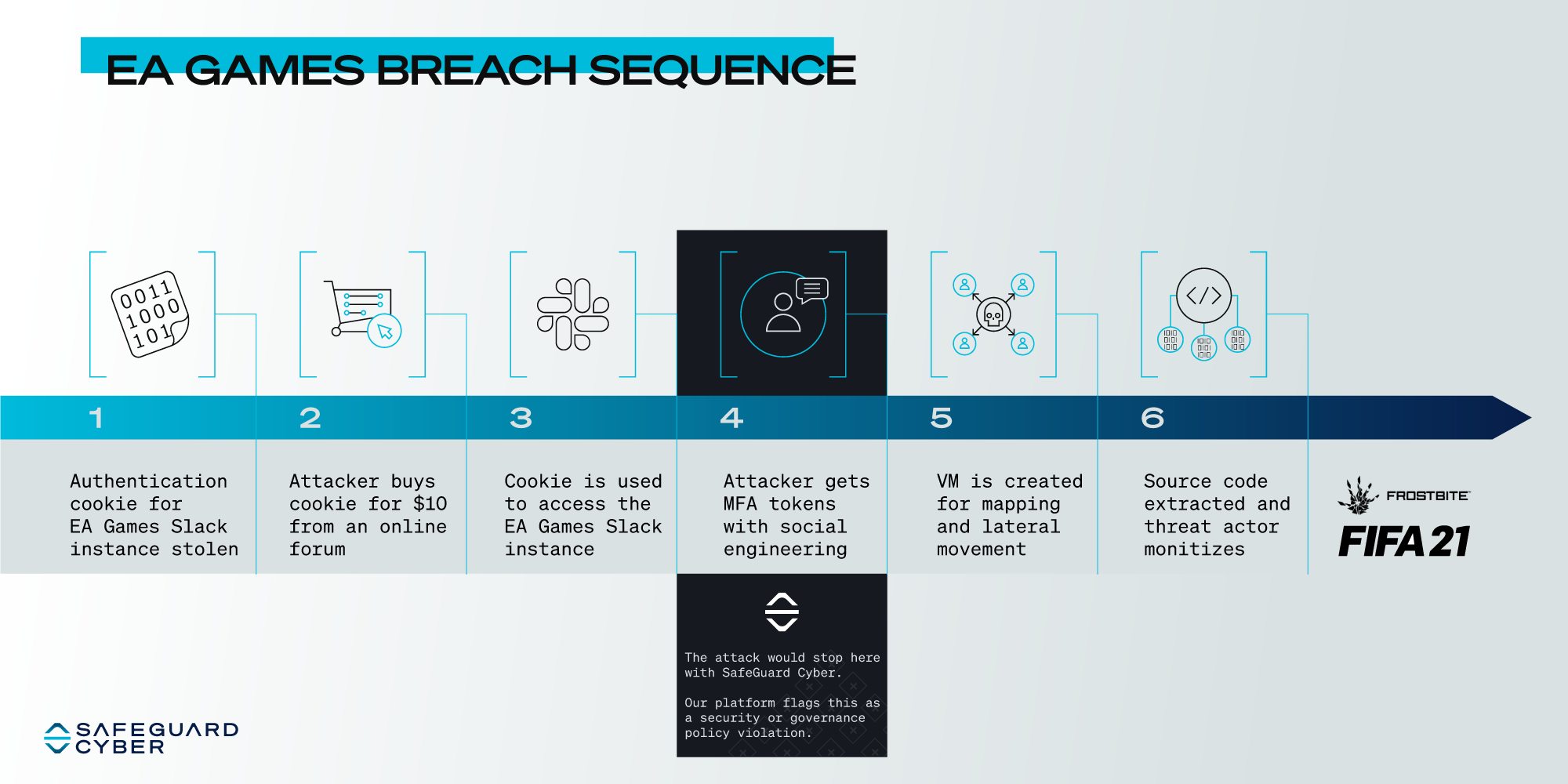 What is significant about this attack

There are several key details about this attack which highlight the expanding attack surface created by the massive adoption of cloud-based applications that bad actors are now exploiting:

Platform: Learn more on how to secure Slack for your enterprise.

How to defend against this as a SafeGuard Cyber customer

With the SafeGuard Cyber platform, you can set up policies to detect when passwords or credentials are possibly getting shared on Slack. This can be used in conjunction with company policies to never share credentials on Slack or other third-party communications. If the threat actor had been forced to receive a password through a company email, the attack would have been thwarted.

Businesses can work with SafeGuard Cyber to build out custom machine learning to detect and alert on a social engineering attacks targeting their employees on internal communication channels, such as the one used in the EA attack. We start by creating policies that look for patterns frequently associated with social engineering and then tailor those policies to your company’s needs. SafeGuard Cyber will then work directly with your business to train the system to its environment. Over time, our AI Threat Cortex system becomes more accurate at identifying malicious content targeted at your employees.

Storm Swendsboe is the Director of Intelligence for SafeGuard Cyber.