It is unknown if it was part of a coordinated campaign, or if it was simply mass targeting users of the channel.

In June 2022, SafeGuard Cyber detected a Trojan posted in a public crypto Telegram channel that we monitor as part of our work with our financial service customers. We analyzed and identified the malware sample as a generic Trojan and reviewed the messages surrounding the post.

SafeGuard Cyber believes this Trojan was meant to target new or unsuspecting users of the channel and is used to steal cryptocurrency keys.

We did not find that anyone responded to either handle or complain about the file, though this does not prove that users of the channel did not get infected. 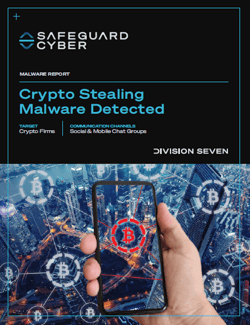 After execution, a command prompt window is displayed and what appears to be an error window appears with indiscernible text. After the user hits ‘enter’ in the command prompt window, it pings the localhost. The program then exits and the application removes itself from the desktop and runs as “Skc3sk.exe”. It also makes a copy in the SYSWoW64 folder and tries to hide itself as an operating system file. The task “Skc3sk.exe” runs persistently in the background. It’s assumed that the callout and ping command is meant to beacon the attacker that the connection is active.

The malware also appears to create hidden copies of the victims’ private and public key store. Since this malware was detected in a cryptocurrency platform, it can be assumed that this malware is targeting victim keys used for cryptocurrency. In addition, since the method used to hide the additional program was dropped in the SYSWOW64 folder, it can mean that this malware could be used as a backdoor.

No further activity was found regarding this sample.

Persistence:
This sample does not establish persistence