In December 2021, SafeGuard Cyber detected a Remote Access Trojan (RAT) being posted in a financial Telegram channel that we monitor as part of our work with digital currency financial services customers. We analyzed and identified the malware sample as a basic RAT and reviewed the messages surrounding the post.

SafeGuard Cyber believes that this was an isolated one-off incident meant to target new unsuspecting users of the channel.

When the file is executed, it runs consistently as a process with the description “Goodcsongvwaiting MFC Application”. While the malware is running, a TCP connection is opened up to 180.215.87.236 on a random high port. The activity seems to just be SYN send packets.

The sample immediately drops two PNG files and a copy of itself into the Appdata\Temp folder. The two PNG files are the same file as they have the same hash values. The PNG files do not have a valid file header and do not seem to have any interaction with the malware sample aside from being dropped from it. These two files may be used to quickly access and execute the parent file from the AppData directory. Additionally, the two files are filled with what appears to be random data, the files do not execute and no activity was seen.

No further activity was found regarding this sample. The file is detected and deleted by Windows Defender as a Trojan:Win32/FarfliTI!MTB.

Persistence
This sample does not establish persistence 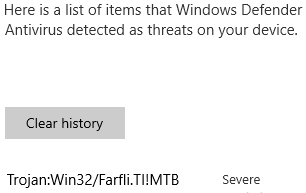